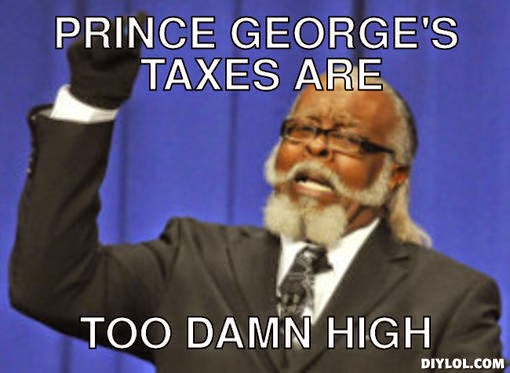 Prince George’s county executive Rushern Baker’s recent proposal to raise the county’s base real property tax rate by 16% has created quite a buzz among residents and the county council…kind of like the buzz that accompanies a plague of locusts.

Many citizens and even a state senator have expressed outrage over what they believe is Baker’s brazen and unlawful attempt to circumvent a voter-imposed property tax cap known as TRIM, which was added to the county’s charter in 1978 and which remains exceedingly popular among the electorate. Under TRIM, any property tax increase must be submitted to the voters for approval.

Prince George’s County already bears the heaviest property tax burden of any suburban jurisdiction in the Washington metropolitan region, and it has the least to show for it. Yet, Baker argues that county residents should pay even more taxes next year, so that the county can fully fund the school district’s proposed FY 2016 budget, which requests an additional $133 million in county funding over the current year’s budget. That equates to a 21.1% increase in county funding to support a proposed 7.6% increase in the school district’s budget.

Baker is betting that his “let’s educate our children” argument will eventually persuade a wary public and council to support his move. But raising taxes to increase school funding isn’t the right move for Prince George’s County at this juncture.

In the chart linked below, I calculated “effective real property tax rates” for 10 county-equivalent jurisdictions in the Washington, DC metropolitan region, as well as for my hometown of Virginia Beach, VA. I also calculated values for each jurisdiction’s assessable tax base per capita and per household. (The methodology for these calculations is described in the endnotes on page 2 of the chart.)


Prince George’s current effective tax rate is $1.377 per $100 of assessed value. That includes a $0.96 base rate, plus $0.112 in mandatory state assessments, plus $0.305 in mandatory assessments for two bi-county agencies operating in Montgomery and Prince George’s counties: the Maryland-National Capital Park and Planning Commission (M–NCPPC) and the Washington Suburban Transit Commission (WSTC).

The additional mandatory environmental fees that Prince George’s charges for stormwater and solid waste management and watershed restoration are not included in the effective rate, because those fees are not assessed based on property value. This is essentially another end-run around the TRIM property tax cap because, in most other jurisdictions, these types of environmental costs are typically paid for out of the general property taxes collected.

County executive Baker’s proposal would raise Prince George’s current base rate by $0.15, from $0.96 to $1.11. That’s a 16% increase, which would result in an effective tax rate of $1.527—by far the highest property tax rate in the region. By contrast, Montgomery County’s current effective rate is $1.120, which includes the mandatory state, M–NCPPC, and WSTC assessments. Arlington County’s current effective rate is only $0.996—the lowest in the region.

Although it is the wealthiest majority-black jurisdiction in the United States, Prince George’s has the lowest assessable tax base in the Washington region, whether measured on a per capita or per household basis. That’s because the county has the lowest property values in the region—values that have sunk even lower in recent years, in the wake of the Great Recession and the ensuing foreclosure crisis. Prince George’s also has the lowest median household income of any suburban jurisdiction in the Washington region.

As detailed in the chart linked below, Prince George’s County has the worst wealth-to-tax rate balance of any suburban jurisdiction in the region. (The District of Columbia technically has a heavier overall wealth-to-tax burden; however, it shifts the bulk of that burden onto commercial property owners, not homeowners. That makes it somewhat of an anomaly in the region.)


Rushern Baker’s proposed 16% increase in real property taxes would still leave Prince George’s County as the least wealthy jurisdiction in the region. Such an increase could also cause some residents to flee the county for neighboring jurisdictions, or dissuade others from moving into the county.

While there may well be occasions when the county may need to raise taxes for the greater good, even if it risks alienating some people, now is not one of those times.

The county executive’s basic premise for proposing a tax increase—that the school system budget needs to be significantly increased to ensure educational success—is dubious at best. According to data compiled by the Maryland State Department of Education, Prince George’s already pays its teachers higher than the statewide and national averages, and has higher per-pupil expenditures than the statewide and national averages, ranking within the top third of Maryland’s 24 jurisdictions in these areas.

The county’s overall education spending relative to its wealth is also well above the statewide averages. (Again, Prince George’s is not a “poor” county; it’s just not as wealthy as others in the Washington region.) So it can hardly be said that Prince George’s County is giving its public school students short shrift at its current funding levels.

Moreover, there are public school systems out there that are funded at much lower levels than Prince George’s, which nevertheless manage to perform exceptionally well. I am a product of one of those systems: the Virginia Beach City Public Schools. I use Virginia Beach as a comparator here because it has similar physical and wealth characteristics to Prince George’s County.

Both jurisdictions are geographically large bedroom communities, with similar population densities. They are both outside of and larger than their respective metropolitan region’s central city, and they are both principally suburban in character. Virginia Beach has a lower median household income and a slightly lower median home value.

As detailed in the chart linked below, Virginia Beach has a significantly lower per-pupil expenditure rate than Prince George’s and also pays its teachers significantly less. Yet, it has higher student achievement levels, a higher on-time graduation rate, and a lower dropout rate:

Virginia Beach's city manager is proposing a $0.06 real estate tax increase in for FY2016—to maintain, not increase, the school system's current funding levels and other city service levels. But Unlike Prince George's, that proposed increase would still leave Virginia Beach with the lowest taxes in the Hampton Roads region.

Virginia Beach’s example demonstrates how and why Rushern Baker’s argument that Prince George’s County needs to dramatically increase its property tax rate to increase school funding rings quite hollow. At the very least, the county executive hasn’t articulated a compelling case for such an increase.

In a later post, I will discuss what Prince George’s County really needs to do to ensure greater revenues going forward. (Spoiler alert: it’s not raising taxes.)
Posted by Bradley Heard at 8:37 AM