If anyone should know the importance of providing safe pedestrian paths to transit stations, it’s a transit authority. But apparently, WMATA can’t be bothered with all that.

Metro’s Addison Road Station, a Blue and Silver line stop in Prince George’s County, has about a quarter-mile of street frontage on one of the county’s main arterial roads, Central Avenue (MD-214).

On Friday, January 29—5 days after the last snowflake fell from #Snowmageddon2016—the sidewalks abutting Metro’s property along Central Avenue were still slicked over with snow, slush, and ice. Metro knew it, and customers had complained about it, but the transit agency just didn’t seem to care.

A Two-Day Quest to Clear Snow from Metro's Sidewalks

I first encountered the problem the day before, on Thursday, January 28, as I was heading back to my office in DC for the first time in nearly a week. As I left my house, which is about a 10-minute walk to the Metro station, I approached Central Avenue with a healthy sense of trepidation about getting to the station safely. That’s with good reason, since people have been struck by cars and killed in Prince George’s while walking in the roadway to get to a Metro station after a snowstorm, because the sidewalks were blocked with snow.

When I got to Metro’s property, I expected to be able finally to have a relatively peaceful walk for the rest of my trip, because I just knew the transit authority’s sidewalks would be clear, right? Wrong! The sidewalks were in atrocious condition.

I alerted the station manager to the situation, and she first told me that it wasn’t Metro’s responsibility to clear the sidewalks. I told her that wasn’t true, that those sidewalks were along Metro’s property line, and that Metro had to clear its walkways just like everybody else. With a somewhat skeptical facial expression, she told me she’d follow up on it.

Just to be sure, I also went online to Metro’s website and reported the problem myself. And even though I reported it as a safety issue, the automated response I got back from Metro said they would get back to me in 5-7 business days. Because…you know…why would Metro ever need to address a safety problem right away?

I didn’t return home via Metro that Thursday evening, so my next trip to the Addison Road Station was on Friday morning. To my shock, the sidewalks along Metro’s property were still a mess. The poor lady walking ahead of me in this photo was slipping and sliding all over the place, and I wasn’t doing much better: 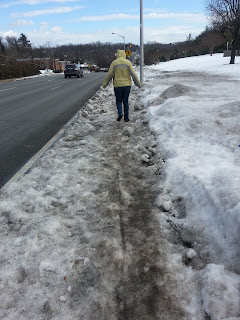 Once I finally got to the station, I approached the same station manager I had spoken to the previous day and asked her, somewhat incredulously this time, whether she had followed up as she said she would. She said she had, and that it was her understanding that the county or the state was supposed clear the sidewalks.
Seeing that I was getting nowhere with the station manager, I tweeted the above picture and tagged Metro, Prince George’s County Executive, Rushern Baker, and a Washington Post reporter.

Metro replied to the tweet a few minutes later, told me it wasn’t their responsibility to clean the sidewalk, and forwarded me an article about who’s responsibility it was to clean bus stops.

After clarifying that I wasn’t talking about a bus stop, but rather Metro’s own property, the Metro rep thanked me and tweeted that he would report the problem.

So when I got back to Addison Road nine hours later, the sidewalk was definitely all clear, right? Wrong! Here’s how it looked on my return trip:

Metro boasts on its website that it has all the equipment and personnel it needs to handle snowy weather:


Metro has nearly 600 pieces of snow equipment available to tackle snow and ice accumulation at stations, rail yards, parking garages, and bus facilities. Hundreds of employees and contractors can be called upon to respond to snow conditions.

And in fact, there is plenty snow removal equipment at Addison Road Metro Station. I’ve seen it. I saw it yesterday, even. And I know it’s being used, because the parking decks, bus loops, and surrounding vehicle infrastructure at the station are never snowy or icy. Also, the area directly in front of the station entrance is usually well plowed and salted. So why the disconnect with the sidewalks?

Late Friday evening, County Executive Baker replied to the series of tweets and asked one of Metro’s Maryland board representatives, Malcolm Augustine, to follow up on this matter. Mr. Augustine promptly replied, apologized, and promised to follow up:

@CountyExecBaker @BradleyHeard @wmata @arelisrhdz Thanks for bringing to my attention and I apologize. I will follow up.
— Malcolm Augustine (@AugustineMLA) January 30, 2016

I very much appreciate County Executive Baker’s stepping in to address this matter, and likewise appreciate the prompt response of Metro’s board member, Mr. Augustine. But seriously, it should not take the county’s chief executive and a Metro board member’s personal involvement to clear a sidewalk after a snowstorm.

Metro is required under its interstate compact to comply with local laws, including sidewalk clearing laws. But setting that aside: Metro’s whole raison d’être is to provide and facilitate safe, convenient transit ridership in the region. It should be a community leader when it comes to ensuring that pedestrians can come and go safely to and from their facilities.

Just as Metro is recommitting itself to improve safety in its rail and bus network, it must also do a better job in the future to ensure that its stations and surrounding areas, including sidewalks, are safe and accessible to all of its customers.
Posted by Bradley Heard at 9:05 AM