The entire Washington metropolitan region let out a collective groan on Friday, when WMATA's new general manager, Paul Wiedefeld, announced his ambitious plan to repair Metrorail’s aging and increasingly unreliable system over the next year. Deep down, we all know that these repairs absolutely need to happen and that we’ve put them off for far too long.

But as we begin the hard work of restoring our Metrorail system to its former glory, we also need to make sure that the region’s commuters can continue to rely on other modes of public transit to get them where they need to go reliably and speedily. To that end, one strategy that Maryland and DC officials should seriously consider is establishing a temporary MARC commuter rail shuttle route between Deanwood and L’Enfant Plaza via the CSX freight rail lines. Such a route could greatly alleviate the congestion that Metro riders on the Orange, Blue, and Silver (OR/BL/SV) lines east of the Anacostia River (EOTR) would otherwise experience during the next year.

WMATA’s “SafeTrack” plan will require complete shutdowns of certain segments of Metro’s 118-mile rail system for weeks at a time. Even when stations aren’t shut down, many will have extended periods of single-tracking or will experience significantly reduced train service levels. Beginning in June and continuing for nearly a year, Metro will carry out 15 of these long-term “safety surge” projects.

In Prince George’s County, the most significant impact of SafeTrack will occur late this summer, between August 20 and September 6, when Metro plans to shut down OR/BL/SV service between Eastern Market and Benning Road (BL/SV) / Minnesota Avenue (OR). This will sever the Metrorail connection to downtown Washington for nearly half of Prince George’s Metro stations and three of the four Metrorail lines in the county.


Similarly, in November and December of this year and March of next year, Metrorail service on the OR/BL/SV lines EOTR will be significantly reduced because of single tracking and closures on other segments of those lines.

To help mitigate the impact of the track work and shutdowns, WMATA plans to have 40-50 additional buses on hand to provide alternate service. It will also run more eight-car trains, since service will be less frequent. Finally, Metro has requested the support of the affected jurisdictions (Maryland, Virginia, the District, and the counties and cities where Metro operates) to implement the necessary traffic control measures to facilitate increased bus and private automobile traffic. But is that enough?

For the types of large-scale, long-term repairs that WMATA is envisioning over the next year, it is going to take more than a few extra buses, dedicated bus and HOV lanes, and traffic cops to avert a commuter crisis. The Chicago Transit Authority, for example, marshaled over 400 buses and had a months-long public outreach campaign before embarking on its five-month shutdown of part of its rail network in 2013.

Similarly, it may not be realistic to ask governmental and private employers to allow significant chunks of their workforce to work remotely for weeks at a time. Those measures may work for a short-term shutdown, such as the 29-hour emergency repair that Metro did in March, but they are not a long-term strategy.

A temporary MARC shuttle could ease a lot of the pain

Fortunately, the CSX-owned freight rail lines that parallel the WMATA Orange line tracks EOTR may provide a workable solution. The Maryland Transit Administration (MTA), which runs the MARC commuter rail system, could work with CSX, Amtrak, and DDOT to establish a temporary MARC shuttle between Deanwood and L’Enfant Plaza from at least August 2016 through April 2017.

The L’Enfant commuter rail station is currently used by Virginia Railway Express (VRE) and Amtrak. A separate branch of CSX railway connects the L'Enfant station to Washington’s Union Station from the south.

MARC currently serves Union Station via three other routes from the north, including its most popular Penn Line service via Baltimore and New Carrollton, on Amtrak's Northeast Corridor. But that existing service is already oversaturated and would not be able to accommodate the masses of additional OR/BL/SV line Metrorail passengers in Prince George's County that will be impacted by the SafeTrack shutdowns.

Currently, there is no MARC station or platform at Deanwood, but as the pictures below show, there are three CSX freight rail tracks directly adjacent to the northern (inbound) track of the Deanwood Metro station: 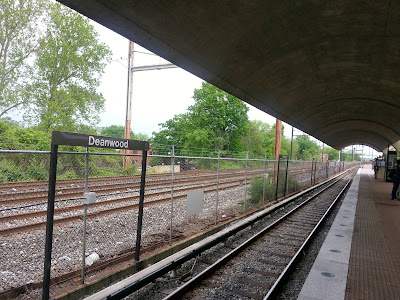 
That segment of the CSX freight rail network, called the Landover Subdivision, is not currently used for passenger service, although it was originally the main Baltimore & Potomac Railroad passenger route between Baltimore and Washington, DC. CSX has at times been reluctant to allow passenger service on its freight lines. But in light of the impending regional transportation crisis resulting from WMATA's planned SafeTrack initiative, we should not assume that CSX would not be willing to make the necessary accommodations to allow for passenger service along the Landover Subdivision.

CSX is a good corporate citizen and has worked with District, Maryland, and federal officials to allow passenger service on its other rail lines in the region. Additionally, under federal law, Amtrak has the ability to prioritize passenger service over any freight rail line, and it could be called in to work with MTA and CSX to establish such temporary regional service in this situation if necessary.

Within a matter of days, MTA could quickly erect a modular platform (like this, this, or this), stairway, and ADA-compliant ramp on the northern side of the CSX tracks, at Polk St NE, which is connected to the Deanwood Metro station via an existing underpass.

Similarly, with a little additional effort, a second elevated platform with stairs and even a temporary elevator could be erected at the southern end of the CSX tracks at the L’Enfant station, along Virginia Ave SW, between 6th and 7th Streets, to provide additional capacity for passenger boarding and alighting there. (As an example, look at these great photos of a temporary elevated platform at Chicago's Pulaski Station.)

The MARC shuttle could run every 15-40 minutes between Deanwood and L’Enfant, depending on the time of day. Orange line customers could ride the Metro from New Carrollton, Landover, or Cheverly to Deanwood and then transfer to MARC. Blue and Silver line customers could ride Metro to the Addison Road station and then take a free express shuttle bus to the nearby Deanwood station.

Each of the OR/BL/SV Metro stations in Prince George's has ample commuter parking, which should be free or heavily discounted during this emergency period to encourage commuters not to drive into the District. Similarly, those commuters transferring back into the Metrorail system at Deanwood or L'Enfant from the MARC shuttle should receive a credit for the Prince George's portion of their Metro fare.


This temporary MARC shuttle could effectively transport thousands of impacted Prince George’s OR/BL/SV line riders per day to and from downtown, and it would do so much more efficiently than 50 additional Metro buses could ever hope to do.

To encourage ridership, the cost of the MARC shuttle should be minimal (e.g., not more than $2.50 each way, and with eligibility for the $0.50 SmarTrip discount for inter-modal transfers from Metrorail or Metrobus). Conductors should use handheld on-board fare collection devices that allow for customers to pay with their SmarTrip, debit, or credit cards.

Over an extended period of repairs, such as those we will face during the SafeTrack program, this temporary MARC shuttle could provide a realistic rail alternative that would keep the region’s commuters out of their cars and committed to transit. WMATA and governmental officials owe it to the public to consider these kinds of creative options.
Posted by Bradley Heard at 8:32 AM