As WMATA begins its 16-day shutdown of all Metrorail service across the Anacostia River, it is hoping that 60-70 percent of its ordinary ridership east of the river will simply abandon the rail transit system in favor of alternative modes of transportation.

That’s not likely to happen, though, unless officials provide more realistic public transit alternatives, such as additional bus shuttles to the Green Line and designated HOV lanes.

This second safety surge of Metro’s yearlong SafeTrack program of major repairs will run through July 3. During that time, Potomac Avenue and Stadium Armory stations on the Orange, Blue, and Silver (OR/BL/SV) lines will be completely closed. That means the approximately 25,000 commuters in Prince George’s County and in DC’s Ward 7 who normally ride those lines will need to find some other way to get to and from downtown Washington and Northern Virginia.

Metro’s website has compiled a detailed list of the current mitigation plans that WMATA, District, and Prince George’s officials have developed. The plans include 40 shuttle buses from Minnesota Avenue and Benning Road to Eastern Market and expanded Metrobus service on several key routes into the District.

That's a great start. However, officials readily acknowledge that the current mitigation plans are not sufficient to meet existing demands. They have stressed that commuters should avoid the Metrorail system if they can, particularly during peak periods. They suggest telecommuting, carpooling, and bicycling as potential alternatives, in addition to Metrobus.

But not everyone can telecommute or change their work schedules, and it’s unreasonable for officials to expect that employers will allow their workers to stay home for two full work weeks. Similarly, biking and carpooling are often not realistic options for many commuters.

On Thursday, Prince George’s County Executive Rushern Baker rightly chastised the State of Maryland for not doing enough to help mitigate SafeTrack. Maryland Transportation Secretary Pete Rahn has been noncommittal on what, if any, services and funds the state will offer its DC metro-area counties in connection with these Metro repairs. To be sure, the state’s aloofness in the face of this crisis is troubling. Nevertheless, it can’t absolve the county from taking primary responsibility for providing workable transit solutions.

For its part, WMATA has consistently stressed that it needs the local jurisdictions to share in the pain of SafeTrack by providing additional resources and coordination—including bus support and traffic controls such as HOV lanes. WMATA is already significantly underfunded by the region; therefore, it is not surprising that it has only limited additional resources of its own to provide.

Bottom line: County Executive Baker, District of Columbia Mayor Muriel Bowser, and their respective transportation departments are principally accountable for ensuring that SafeTrack will not cripple their residents. This is a quintessential local public safety and welfare issue that cannot be delegated to anyone else, including WMATA or the State of Maryland.

Thus far, Mayor Bowser and District Department of Transportation (DDOT) Director Leif Dormsjo have rejected the idea of establishing temporary bus lanes to facilitate bus bridges across the Anacostia River. They claim that such lanes would require more study and might adversely limit lane capacity for other motorists.

This is a transportation emergency that calls for transportation officials to make quick and effective decisions, using the best information they have at the time. There is simply no time to do lengthy transportation studies.

Common sense dictates that the county and the District will need to rely heavily on buses to bridge people around closed Metrorail stations during this safety surge. Accordingly, transportation officials should establish quick ways to move those buses over the roads. The priority should go to buses and carpools, rather than single-occupancy vehicles. Saying that buses will have to wait in traffic is ignoring a problem, not creating a solution.

Because Prince George’s County’s seven Green Line stations will remain open and running on a normal schedule during this OR/BL/SV line segment shutdown, it makes sense for the county to leverage those stations to the greatest extent possible.

Right now, DPW&T has no plans to provide bus shuttle service between the Blue and Green lines in the less affluent central part of the county (e.g., from Addison Road to Suitland).

Yet, on the wealthier northern end of the county, DPW&T has secured 10 charter buses to provide a free shuttle between New Carrollton and Greenbelt. This is a striking inequity that can and should be corrected immediately.

Similarly, the county should be prepared to establish additional satellite commuter parking and bus shuttles at available locations near Green Line stations if existing station lots fill up.

All of these measures will empower commuters to make alternative transportation decisions that they otherwise would not be able to.

County Executive Baker has repeatedly assured the public that the county will do everything it can to assist its commuters during SafeTrack. Now is the time for the county to make good on that promise. 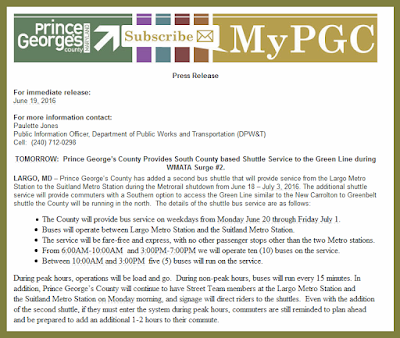 It's unclear why DPW&T chose to run the shuttle from Largo station instead of the much-closer Addison Road station; however, one possible advantage to Largo is that the adjacent and nearly-empty shopping center, the Boulevard at the Capital Centre, provides the possibility for overflow commuter parking in the event the Largo parking deck fills up.
Posted by Bradley Heard at 8:40 AM