When Will Prince George’s Pull the Plug on Dead Development Projects? 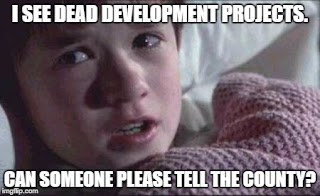 If a development project was approved for construction prior to the Great Recession, but it still hasn’t been able to get off of the ground yet, isn’t it time to acknowledge that the project is just…dead? Well, yes, obviously! So why does the Prince George’s County Council have so much trouble letting go of these projects?

Most of the county’s backlog of deadwood development projects consists of large single-family detached residential subdivisions located outside of the Beltway and far away from transit. These are exactly the types of suburban sprawl projects that the county’s own planners have concluded are harmful.

According to planners, this glut of existing and planned low-density residential development makes it harder for the county to develop at the appropriate densities around its 15 Metro stations. That, in turn, puts the county at a competitive disadvantage with both millennial and older homebuyers who are looking for walkable urban development close to transit and with nearby amenities.

Additionally, studies show transit-oriented development (TOD) is a more fiscally sustainable form of development. Thus, the county council would do well to encourage new TOD projects around Metro, rather than clinging to far-flung sprawl projects in places that look like this:

Moreover, there is no longer any market need for the county to keep extending the expiration dates on these long-stalled projects. The Great Recession has been over for quite some time now, and housing prices continue to rise in Prince George’s County. Indeed, County Executive Rushern Baker recently celebrated the county’s 61 percent increase in property values since 2010.

Lest you think that there’s no harm in extending the approvals on these dead projects, think again. Keeping old development projects in the pipeline significantly distorts the county’s true development landscape. That’s because the county still has to act as if all of the approved and unexpired development will in fact get built.

This means the county needs to plan and budget for more roads, water and sewer lines, schools, fire stations, and other public facilities to accommodate planned growth that has little possibility of ever happening. It also means new developers might be required to contribute to that new infrastructure, when it may not even be necessary for their particular projects. That puts an unnecessary burden and expense on new and otherwise viable projects, which ultimately discourages quality developers from building in the county.

The council will hold a public hearing on the latest extension bills, CB-97-2017 and CB-98-2017, on Tuesday, November 7, at 10:30 am. Please show up to testify and also contact the councilmembers to let them know your position on these bills.
Posted by Bradley Heard at 8:43 AM